I wanted to make a castle using the one in the Cricut “Once Upon a Princess Cartridge,” and Munchkin #1’s Frozen themed birthday party was the perfect occasion!  I had to look online for a few other bloggers who had made this castle because there are no written instructions for it, just fairly vague pictures.  This was the most helpful post.  The only supply I had to purchase for this project was the “regular” Buffalo Snow flakes to add to the iridescent Buffalo Snow flakes I had on hand.


Steps 1 & 2:
Laminate the sheets to themselves. Then cut all pieces needed for the castle at the settings above.  No photos of this step as it\’s very hard to photograph clear laminate.

Step 3:
Fold tower pieces as shown in the book (these “instructions” were hard for me to understand,but I only had 1 piece which had to be refolded the correct way.)  Use hot glue to secure the tower pieces (tubes and caps) and interior “walls” as shown in Cricut book.  Assemble all other pieces as Cricut book instructs. 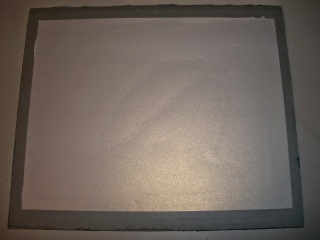 Step 4:
I used an old piece of cardboard which was in my office at work to use as a base for the castle. I attached a sheet of white gold shimmer cardstock (Recollections brand) to the center of the cardboard.  I put hot glue at the bases of the inner towers and walls, and quickly attached the castle to the cardboard, centering it in on the white section.  I then added glue all around the base of the castle. 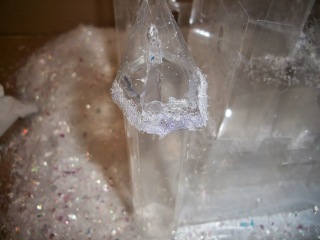 Step 4:
I added the clear glitter glue around the bottom edges of all of the tower caps and sprinkled clear glitter to them.  (Due to the static nature of the laminating sheets, the excess glitter wasn’t completely removed from the rest of the castle.

Step 5:
This was done before step 4 because of an accident with the glitter glue bottle (squirted all over the cardboard base), but it\’s better done after glittering the caps.  Spread glitter glue (spread on with a brush or paper towel, in my case), or any other craft glue around the castle covering as much as the cardboard base as you want.  I mostly wanted to just cover the blue sections.  Mix a handful of iridescent and regular Buffalo Snow together in a bowl (I used the ziploc bag I kept the open Buffalo Snow bags in).  Sprinkle the mixture onto the glue liberally.  Let glue completely dry before shaking off excess.  TIP: Set castle and base in a cardboard box (I used the top of a copy paper case) to apply the snow in to protect your floors as much as possible.