Last year I threw myself a big birthday party, the kind of party kids have.  I had the party at the beautiful Los Encinos State Historic Park.

I also made some PVC bows and arrows using this tutorial, but I didn\’t curve the PVC as I found they worked better (arrows shot much farther) if I left them straight. This meant they didn\’t look like bows, but they worked so that\’s what was important to me. I also used pencil top erasers as the \”arrow\” and that also worked well.

I made a Hulk Smash Box similar to this, but I used one of the boxes I had received from ordering all the candy favors online. I used white foam core board and cut holes in the cardboard box and the foam core and sandwiched green tissue paper between them. I put small prizes inside.

Here are a few of the favors I made for each of the guests at the party. I made sure there were things specific for kids, too.

I got this cheeky idea for Black Widow favors.

I also made arrow straws filled with Pixy Stix.  I don\’t have a picture of them, but I made them again for my niece\’s Hunger Games birthday party seen here. I also made black arrow pens gluing felt to form the fletching.

Using the freezer paper stencil technique, see this tutorial, I made these shirts for prizes. 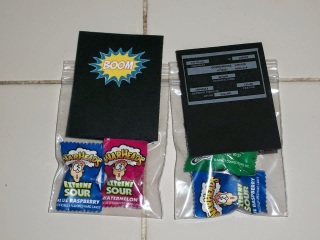 Tesseract Cubes (cotton candy flavored rock candy) which I had to label since it looked like it was from Breaking Bad. 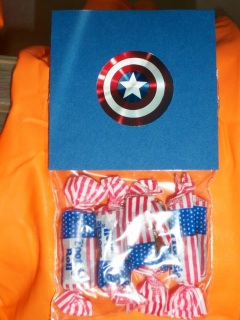 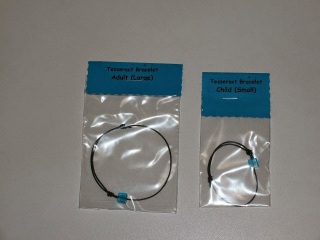 The Hershey\’s Kisses were given to me by a friend as leftovers from the candy bar at her son\’s Bar Mitzvah.  I cut a bunch of small boxes with my Cricut and placed 1 kiss per box.  I tried to use Avengers colors (Green-Hulk, Deep Red – Thor, Yellow – Iron Man, etc.)

I printed a pumpkin carving stencil onto cardstock to use as a stencil to paint the \”A\” logo onto the tote bags which I gave to each of the guests to hold all of their goodies.

I also made Avengers bookmarks, and I still have some of those, I don\’t have a picture of them.

Follow Weird Life of V on WordPress.com
Join 365 other followers