I hadn\’t planned on going near the Iron Man 3 premiere until the early afternoon the day of the premiere when I found out Tom Hiddleston would be attending.  I was off work early enough for me to run home and get my \”good\” camera (SLR) and get to Hollywood and Highland area for the premiere.  There really weren\’t a lot of people lined up on the the South side of the street (same side the El Capitan Theatre is on which is where the premiere was being held), and I was only in the second row from the barriers.  The set up meant there were fans lined up in the middle of Hollwood Blvd. where they had more barriers.  I think those people had passes to see the film that day (but from what I could tell they didn\’t go into the El Capitan, but there are a few theaters very close by.


Since I hadn\’t planned on going, my camera battery wasn\’t fully charged.  It started to die near the end of the night when Tom Hiddleston arrived.  It would give me a low battery warning after every snap, so I would shut it off, take a picture, and repeat, repeat, repeat!  Chris Hemsworth also attended the premiere but he arrived so late he didn\’t come near the fan areas, and my camera\’s battery was too dead to take low-light pictures in focus (he was too far for flash photography).


Robert Downey Jr. arrived in the lane closest to where I was standing rather then across the street (the picture of Peter Facinelli was the drop-off area.)  He signed for quite a few fans.


Tom went down the entire line of fans on the streetside I was on.  There were lots of paper Iron Man masks handed out just before the arrivals, and I managed to get two (and gave one to a little girl near me—she was not at all interested in what was going on.)  I got Tom\’s autograph on one of the masks, then spent the rest of the time taking pictures of him signing for everyone else.

Some of the other people I only managed to get pictures of their backs so I\’m not posting them.  The most notable/famous were Don Cheadle and Shaun Toub (Yinsen from the first IM movie).

This picture of Robert Downey, Jr. is when he went to the Skype livestream, and I can\’t remember if this was before or after he came to the fan section.  I\’m pretty sure it was after. 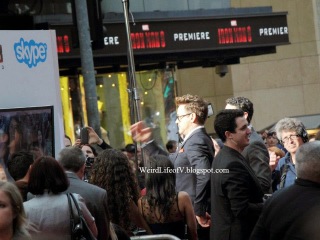 Here are the kind folks who came to the fan section.

Zachary Levi and Tom were coming down the line of fans from opposite ends and when they met up, they greeted each other as if they had no idea the other was there.

I\’ve camped out for several premieres and have attended several others, but this was a really fun and laid back premiere.  Everyone was having fun, except for the little girl near me.
About that little girl.  Her family was in Los Angeles on holiday and happened to be doing the touristy checking out of the Hollywood Walk of Fame, the Famous Handprints in front of the TCL Chinese Theatre, etc. when they saw the set up for the premiere.  They had three daughters aged around 7/8, 12, and 13ish.  The older girls were extremely excited to get to see the stars at the premiere, but their little sister was really annoyed.  I expect she was also a bit cranky because she was tired of standing for hours. They were a great family, and I obtained an email address to send some of the pictures to them as they hadn\’t brought a camera with them.
Here is the Iron Man mask Tom signed. I no longer have it as I auctioned it off as a fundraiser to donate to the NerdHQ fundraiser in 2014.