This is the second installment on my recaps of the (mostly) free fun you can have in San Diego\’s Gaslamp Quarter and surrounds during San Diego Comic-Con none of which require a con badge.  There was one paid event I went to during SDCC in 2013 which was SherlockedCC, a party put on by the Baker Street Babes for fans of BBC\’s Sherlock.  The cost for the event is pretty low in comparison to other parties in the area.  I won\’t be posting about that party today.  (But stay tuned for a recap of those parties in 2013 and 2014 when it gets closer to the 2015 party announcement.)

I didn\’t have a SDCC badge in 2013, and was a bit low on cash, but I took my nieces to the Gaslamp Quarter to do some of the free events and check out the amazing Cosplay.

We\’ll start with the Assassin\’s Creed ship (actually the Star of India) which was in the harbor Friday and Saturday only.  I\’ve always wanted to see the Star of India, and this was a great (and free!) way to do it.  I was impressed that so much was allowed to be changed on the ship, but I\’m sure the San Diego Maritime Museum was well paid for it.  On the deck, they were doing straight razor shaves, which I didn\’t participate in being a woman and all, but I did grab a free can of shaving cream and a Gillette razor.

Below deck,there were several displays of historic ships as well as back drops for the game.  There was also a photo booth with themed costumes, and they also provided you with a print (maybe more than one, but I can\’t remember). 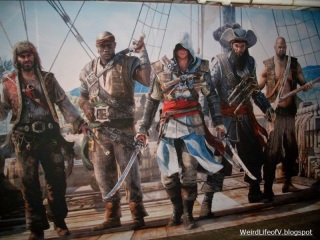 It was fun to walk around the ship and take in it\’s glory.  Click on the link above to learn more about the Star of India.

While waiting in line for the Assassin\’s Creed ship experience, I saw this Minion blimp flying above, and there were people walking around with large balloons promoting Cosmos.

In the Interactive Zone, there was a fantastic car display in which all of the cars were designed around a specific DC Comics superhero or superhero team.  These cars were all up for bid as well.

I have to say that I really, really loved the detail which went into those cars as I would never consider buying a Kia otherwise.

Next to the car display was a Superman \”game\” sponsored by Norton after which you were given a bag with some flyers and a small superhero cape. Then you could get a green screen picture taken which was then imposed onto a Newspaper headline.  They gave you a card with a code to download the photo. 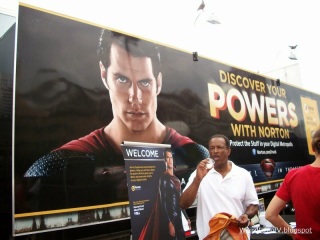 The Walking Dead Escape was promoted in the zone:

There were other things to see as well as a phone charging station (which I took advantage of). 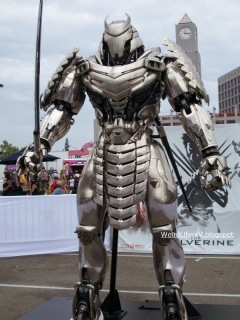 We walked around near the Tin Fish restaurant and did the Black List and Dracula activities.  The Dracula exhibit included getting a photo taken in a crypt which was cool…and a bit creepy. 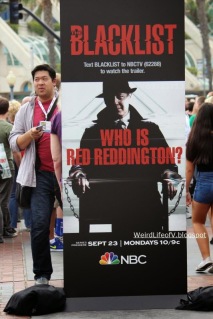 I love how the Pedi-Cabs are decorated for SDCC.  This driver (couldn\’t get a good pic of him) looked a lot like Colin O\’Donoghue.

Further down, was a huge Ender\’s Game exhibit with actual sets and props from the film.  After the exhibit, you could get a picture taken which they gave you a dogtag with a code to download the photo. 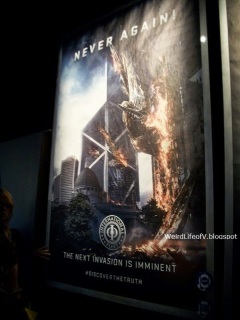 There was this cool puppet in the street in the Gaslamp (near the Hard Rock Hotel). 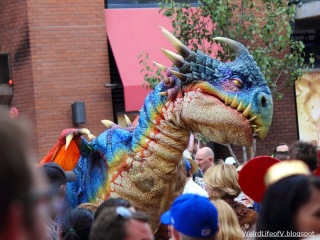 Just walking around the Gaslamp Quarter (a few blocks north of the Convention Center) it\’s a bit quieter, yet there are people everywhere handing out free stuff.  I was given a small pocket emergency kit (sponsored by Best Buy),  a couple of bottles of water (sponsored by the movie, The Worlds End), and other stuff.

Remember to follow Outside Comic-Con  (Twitter: @outsidecomiccon ) for all the events happening outside the Convention Center during San Diego Comic-Con.

Comments are closed.
Follow Weird Life of V on WordPress.com
Join 365 other subscribers