When you have a SDCC badge for all four days, it becomes difficult to choose between camping out in lines (and rooms) all day and taking advantage of all of the activities outside of the convention center.  Not all of the events and activities outside of convention center run all weekend (again, I highly recommend Outside Comic-Con website for a detailed list and schedule).  In 2013, I was unable to find the Nerd HQ entrance (for more on Nerd HQ, check out the Nerd Machine\’s official website and my friend had several blog posts in support of the I Want My Nerd HQ campaign here), but I made a point to find it in 2014.  I focus on the events which don\’t require a con badge, and are free in these posts.


Probably my favorite thing was the Gotham zipline which I didn\’t do until the last day of the Con, Sunday.  It was a 3 hour wait (and it did rain pretty hard for about 30 minutes which added to the time), but it was worth it.  Since you had to be 18, my youngest niece couldn\’t go on it (she was elated by that fact) so she took pictures for me.  You also get a printed picture and gif of your trip down the line.  By Sunday, they had run out of the police badges and t-shirts which were given to everyone who had participated.

Next to the Gotham zipline was a Godzilla display.  I had seen this Godzilla structure in Hollywood when it was on display for about a week in front of the historic TCL Chinese Theatre (before that it was a decoration for the Godzilla after-party for the Los Angeles premiere).  What I wasn\’t expecting was to hear a very loud Godzilla roar while waiting in line checking out the fan art they had displayed. I\’m not ashamed to admit that I jumped because it scared the hell out of me!

I love Godzilla, and was interested to see what else they had.  There was a station to make a gif of yourself running away from Godzilla and another for a green screen picture which was placing you in the movie poster.  The gif was emailed to you (or you could post it to Facebook or other social media), and you received a printout of the photo taken (you could also have it emailed to you).  They also gave you a cool drawstring backpack.

We also spotted a penguin from Penguins of Madagascar!

To the left of the Godzilla display was the Into the Storm display.  The Titus was on display (though you couldn\’t get in it), which is this customized vehicle for storm chasing. 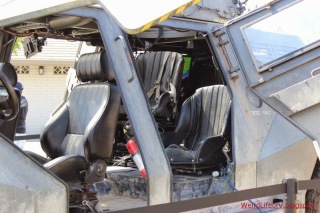 I didn\’t take pictures inside Nerd HQ, but once you go through the entrance you are greeted by these fantastic steps!

Here are few pictures from the Interactive area near Petco Park.

I didn\’t go into the Adult Swim area.

The X-Men thing was really cool. You could take survey to find out which X-Men or Villain you are, then have your picture taken (with your own device) behind one of the character boards (you could be Wolverine, for example), then you could record your own message, which I was a little uncomfortable with as I am not an actress!

Next to the X-Men experience was a Teenage Mutant Ninja Turtles display where you could climb on the Turtle\’s vehicle and \”shoot\” Shredder\’s men.  You could also get a photo taken (they gave you a printout), and get a free slice of pizza! I didn\’t take any pictures of this area really because I was too busy stuffing my face.

On Sunday evening, we went to the Agents of SHIELD party which was held by a fan group at a local bar.  They didn\’t have the whole place to themselves and it was pretty crowded with all of the other \”regular\” patrons.  I\’m not sure if I would go again, but I\’m thinking about it.