By fandomventures in Travel on March 5, 2015April 22, 2021
No comments
The La Brea Tar Pits and Page Museum
February 21, 2015
As I mentioned in my “One Last Party “ post, I had joined a few of the party guests in a trip to the Tar Pits and Page Museum the morning before the party.  In my car, I brought with me a girl from Belgium and another from Australia.  We met up with a few others who were in town for the party.
TIP: I highly recommend ordering and printing your tickets online at least a few days before your visit to ensure you get to do the tour and shows you want.
First up was the Ice Age Encounter, which is a 15 minute, show with a Saber Tooth Cat “puppet” which freaked me out a bit.  I’m such a wuss when it comes to those things.  I freaked out a little bit with the dinosaur puppet at the Los Angeles Natural History Museum several years ago.  (I was fine until it made it’s growling sound.)  Lucky for me the cat did not make a growling sound.  It still freaked me out a bit when it looked in my direction.
After the Ice Age Encounter, we went to the bone lab to meet up with our guide for the Excavator’s Tour.  There are actual staff and volunteers working on bones in a glass enclosed lab and the visitors can watch it all.  It’s really interesting and I don’t know if the man in my photos was staff or a volunteer.  He was working away for a good 15 minutes before he realized there were 20+ people watching him.  When he looked up and saw us all he was surprised then smiled and waved.  I’m not going to lie, I found him pretty attractive as did a few others in my group. 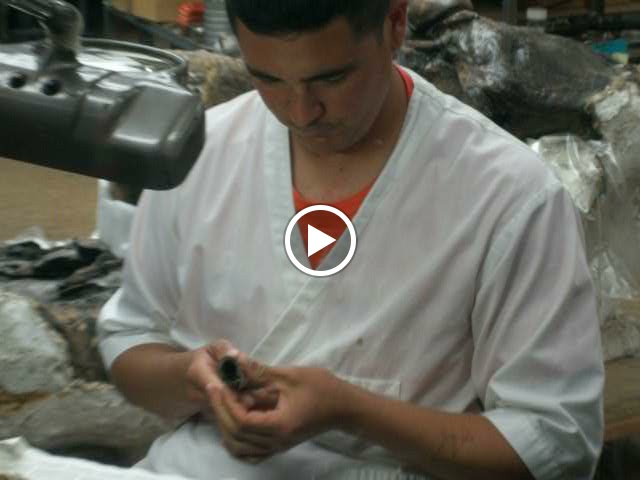 I believe our tour guide’s name was Jason, but I could be wrong.  The tour is all outside in the park area, and is quite informative.  The great thing about the Tar Pits is that it’s an active “dig” site and there is such a concentration of fossils in the middle of the great metropolis of Los Angeles.
The first stop in the tour is the Observation Pit (that name may not be correct). One important thing to remember is that this place stinks because of the liquid asphalt (it\’s not tar, tar is man-made).

Most of the current work is being done on a project called Project 23 (that\’s the number a large crates holding the specimens) which came about because LACMA (Los Angeles County Museum of Art), which is located next to the Tar Pits, dug into the ground several years ago to make an underground parking garage.  They tapped into a huge deposit of fossils which included an intact tusk (which can be seen in one of the photos I took of the lab).  Unfortunately, the crew was on their lunch break when we stopped by the Project 23 area.

After the tour, we wanted to walk around a bit, but one of the people in my car had a hair appointment within the hour so I gave her a ride to her appointment, then dropped off the other girl back at Hollywood & Highland Center.  I had to get my dress from the cleaners and take a short nap and get ready for the party myself.
We spotted this butterfly on our walk back to the car.
I plan on going back to the Page Museum and looking around a bit more, hopefully sooner rather than later.  I\’ll bring my \”good\” camera with me next time, too.
TTFN
– V