I didn\’t have passes to attend the Los Angeles premiere for the new Dwayne \”The Rock\” Johnson film, San Andreas, but I went to the Hollywood and Highland area to try and get some decent pictures.  I didn\’t get as many good photos as I would have liked (most were a bit blurry) due to how fast the actors were moving and the pushing and shoving among those in the fan area.
I arrived to the area around 5:30 and arrivals would start a little after 6pm, so I was later than I would have liked, but I was still able to get a great spot almost directly across from where the stars would be exiting their vehicles.
The best part of the event was The Rock arriving aboard an LAFD truck and a LAFD helicopter hovering above (quite low so dust and debris blew around a bit), which you can see in these photos.

Here are the only halfway decent pictures I was able to take of Colton Haynes (that boy moves too fast!). 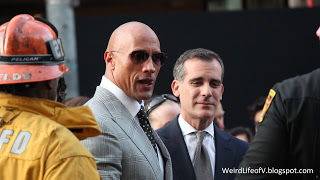 I was really waiting for Ioan Gruffudd and Alice Evans to arrive and was afraid I had missed them.  They arrived last, after Dwayne Johnson, and most of the photos I took were blurry, but I did get a really good close-up photo of Ioan.  Alice didn\’t come over to where I was standing.

I took a really cute picture of Ioan going to Alice to go back to the black carpet together and holding hands, but it was really too blurry.

I used to only go to fan areas of premieres if I was really interested in one or more of the stars, but I realized that I had forgotten that it\’s a big deal for so many people since they don\’t have movie premieres anywhere near where they live.  I guess living in Los Angeles had made me jaded.  I\’ve decided to start covering more premieres (when I\’m not attending them) for those fans who would love to be there but are unable to.
I\’ll be seeing San Andreas tonight at another advance screening, so we\’ll see how it is.  I\’m expecting lots of action and an unplausible story, and I\’m okay with that.
TTFN,
Veronica