I recently took a solo road trip from Los Angeles to Portland, Oregon. I had intended on going to Salinas, California to have lunch at the Steinbeck House Restaurant, and I wouldn’t have had time to go to the Charles M. Schulz Museum and still make it to the campsite before dark.  I got to Salinas very early, though, and there is nothing to do for 3 hours to kill time until the Steinbeck House Restaurant opened (I also didn\’t have a reservation), so I decided to leave Salinas and go to the Charles M. Schulz Museum in Santa Rosa, California instead.
Regular Admission to the museum is $10 for adults, but I managed to get free admission because I work for a museum in Los Angeles.  Near the entrance to the museum is a large Charlie Brown statue as wells as Snoopy’s doghouse.  There is a pint-size labyrinth for the kids to the left of the museum entrance as well. 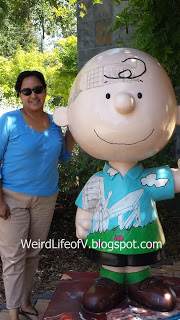 I happened to be there during the “Peanuts in the Penalty Box” exhibit (open until August 16, 2015), and I love hockey so I really enjoyed it.  The main exhibit is “Animating Comics” (open until October 15, 2015) which provided some interesting insight into such classic Peanuts movies such a ”A Charlie Brown Christmas.”
The main entry hall of the museum has a very large and impressive tile mural creating the images of Lucy and Charlie Brown.  It’s the first thing I noticed when I walked in (hard to miss since you are facing it when you walk in. 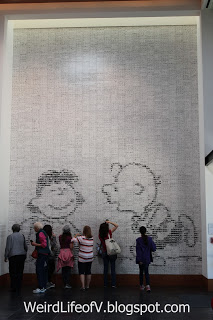 There is a tribute to Charles “Sparky” Schulz on a wall in the entry hall as well.  I love the quote which you can see in the photos below. 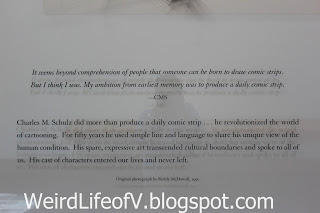 The mural is made up of 3588 ceramic tiles each printed with a comic strip hand selected by the artist, Yoshiteru Otani.  These tiles are also found in the restrooms of the museum.

In the room where the “Peanuts in the Penalty Box” exhibit is there are a few sofas with 3 scrapbooks on a cocktail table.  I only looked through 2 of them.  Of those I looked at, one was focused on the Peanuts characters’ appearances in the Macy’s Thanksgiving parades over the years.  I spent the most time looking through the scrapbook on Schulz receiving the Congressional Gold Medal (posthumously) in 2001.  This is the highest medal the United States Government can bestow upon a civilian, but is just one of many awards he received during and after his lifetime.  The scrapbook included the actual invitation to the Congressional Gold Medal Ceremony as well as newspaper clippings, letters and other memorabilia.
I confess that as much as I have loved the Peanuts comics and movies, I didn’t know anything about Charles M. Schulz such as his love of hockey.  The comic strips which featured the hockey theme would include the Zamboni (the vehicle/machine which resurfaces the ice for hockey and ice skating rinks) as well as famous hockey players. 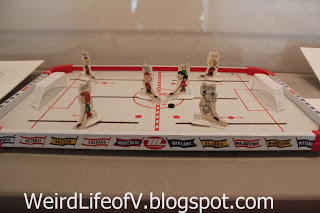 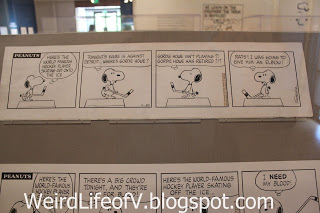 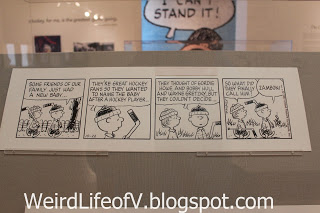 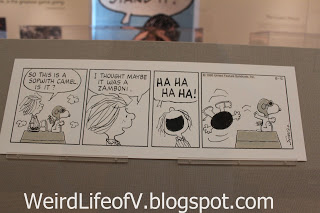 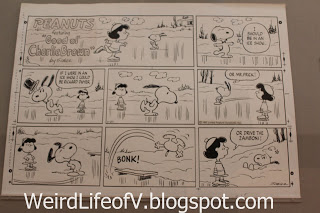 In the “Animating Comics” exhibit, the Emmy which was won for “A Charlie Brown Thanksgiving” in 1974 was on display.  Most of the exhibit focused on “A Charlie Brown Christmas” and I was intrigued to discover that the idea for the movie came from Executive Producer of “A Charlie Brown Christmas,” Lee Mendelson after he and his wife had read Hans Christian Andersen’s “The Fir Tree” to their kids.  The most interesting thing I learned about the Christmas classic was that it was that at the initial screening for the network (CBS), they (CBS) felt it was too slow and fell flat.  But because of the amount of marketing for the movie across the country, they still aired it and only “Bonanza” had higher ratings.  Coca-Cola was the original sponsor for “A Charlie Brown Christmas” and received many letters of appreciation some of which were presented to Schulz in a scrapbook as a show of gratitude.  The show went on to win a George Foster Peabody Award, and is still aired every year to this day.  It was hard for me to believe how the network didn’t like it but was stuck airing it, and the movie is a beloved classic still airing during the Christmas season for the past 50 years (on ABC who bought the rights to the film in January 2000).

There were some cells (which I didn’t photograph because the images didn’t turn out well) on much more recent animated shows/movies such as Spiderman and Teenage Mutant Ninja Turtles. 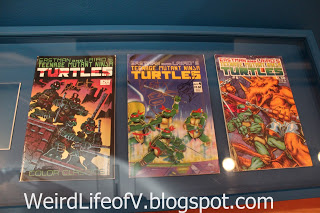 The second floor of the museum has a hands on art and educational room (I didn’t go in there), and the reproduction of Sparky’s studio (the pieces were moved from his studio to the museum) as well as a timeline of Charles M. Schulz life.  There was so much information in that room, and I tried to focus on the international awards from France and Italy (pictured below), the nursery wall he had painted in his daughter’s room in their Colorado home (the history of that wall was incredible), and Sparky’s hockey life. 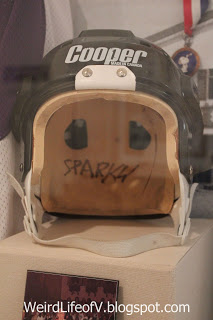 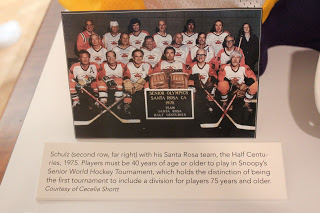 I didn’t have much time to spend at the museum, and though it is fairly small, I didn’t have enough time to really look at most of the displays.  I also didn’t make it across the street to the ice rink and larger gift shop.  I bought a few character magnets for my friends’ daughters (Munchkin 1 and Munchkin 2) which would fit their personalities in the tiny gift shop in the museum building.  There is also a theater which shows films or clips in the entrance lobby area, but I also didn’t have time to go in there.  I definitely want to return to this wonderful museum.
TTFN,
V