By fandomventures in Archives on June 30, 2015April 22, 2021
No comments
Terminator Genisys Screening with Q and A
Hosted by Hero Complex
Los Angeles, June 29, 2015
I went to a free screening of Terminator Genisys last night which was hosted by the Hero Complex and sponsored by Imax. I love the Hero Complex screenings as they give everyone free popcorn and soda (or water if you prefer). The Q&A\’s are also fun. The Q and A after the screnning was moderated by Meredith Woerner (LA Times Staff Writer) and had producers David Ellison and Dana Goldberg, and actor Jai Courtney (\”Kyle Reese\”).

The main takeaways I have from the Q&A are:

1. They want to make more and hope to get to (read: go see the movie!!), and they know what the last line of the, potential, third film would be.

2. Apparently, Jason Clarke (John Connor) has a serious prep for scenes (Jai started laughing at this comment by David Ellison, so I\’m assuming that David made a significant understatement.), but Ellison wouldn\’t elaborate. 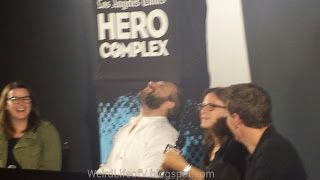 3.  An audience member asked Jai a question on how comfortable it was to film the nude scene with Emilia Clarke (Spoiler: there are no sex scenes in the film).  Jai responded that they were wearing modesty \”devices\” then strapped into harnesses so it wasn\’t comfortable at all.  He avoided the implied question completely.

4. Jai\’s physical prep for being naked a few times included 2 months of lots of running and working out for 2 hours every day, drinking roughly 2 gallons of water per day, and eating nothing but salmon.  He did say that it was \”no way to live.\”

Hero Complex hosts screenings in various cities, with Los Angeles and New York being the most common.  I found out about this screening via their Twitter account.
I just obtained some passes a few minutes ago to a screening of Marvel\’s Ant-Man tonight (with possible cast appearances), so I\’ll post about that later this week.  I didn\’t cover the Ant-Man premiere last night because I was at this Terminator Genisys screening.