By fandomventures in Archives on July 18, 2015April 22, 2021
No comments
SherlockeDCC 2015
San Diego Comic-Con
July 10, 2015
This was the third year for the SherlockeDCC party held during San Diego Comic-Con, and the second consecutive year being held at the San Diego Central Library.  We had the entire 9th floor of the library for the party which has great views of Downtown San Diego. The party is open to all ages, and you don\’t need a San Diego Comic-Con badge to attend.  Tickets sell out within a few weeks of going on sale, so be sure to follow Baker Street Babes on Twitter and/or Tumblr for information on when tickets will become available.

SherlockeDCC is put on by the Baker Street Babes, The NerdyGirlie, Being Geek Chic, and SherlockDC, and they do a marvelous job.
There were games to be played, a photobooth, live music, cash bar and plenty of appetizers to munch on.  There were several new vendors at the party, if I only wish I had had money to spend, but I did get the business cards of those I wish to buy from so that I can purchase via their websites/Etsy stores.

This year, I made a few Sherlock Holmes themed charm bracelets, and a few beaded memory wire bracelets for the raffle.  There were many raffle prizes, and raffle tickets were $1 each and the proceeds benefited Crohn’s & Colitis Foundation of America and Cool Earth charities.  I also made fans for the goody bags which featured artwork by my eldest niece.
Steven Moffat and Sue Vertue made a surprise appearance at the party (they also came to the first party in 2013), and held an impromptu Q and A session.  I was a bit back from the crowd, but tried to get some pictures though I didn’t have the telephoto lens for my camera on hand, so these are the best I could get. 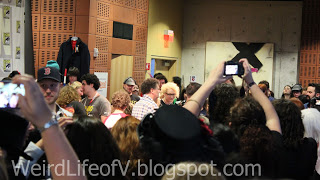 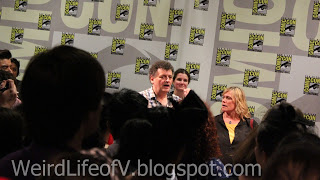 After Steven and Sue left the party, we noticed a fireworks show from the direction of Petco Park (it was actually from behind the convention center where the San Diego Symphony was holding a special Star Wars concert), and I managed to get some photos and video of that show.   Watching fireworks from the top of the library was a pretty special experience. 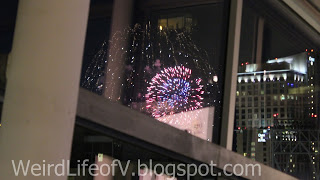 Curtis Armstrong from the \”Revenge of the Nerds\” films was in attendance at the party.
I always enjoy this party, and I’m looking forward to the next one!