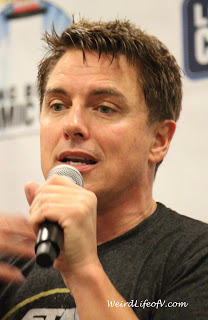 There was a sign-language interpreter next to the stage, and she was sort of roped into the job since there weren\’t any official con interpreters available.  She was with a family member (I could be wrong about that as I could barely hear her explaining to John what had happened) who was hearing impaired so she volunteered to sign for the panel.  John definitely had fun with her throughout the panel, and it was fantastic! 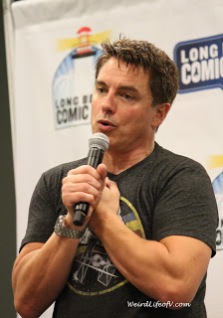 I love how NC-17 John\’s panels are, but he is very aware that children are in the audience and warns the parents at the beginning.  He has great interactions with the kids in his audience as well, which is great to see. 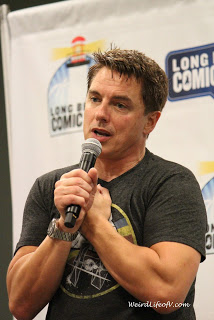 John explains his love and appreciation for the opportunity given to him by Doctor Who in the video below.


One of the stories he told was about farting on a plane, and after he told that story, his phone started ringing and he answered it since it was Scott.  He tried to get Scott to speak to the audience, but he didn\’t say much.


He told the story of his being naked for a scene on Torchwood and what he did behind the scenes.


The video below is a story of him farting during a scene on Arrow.