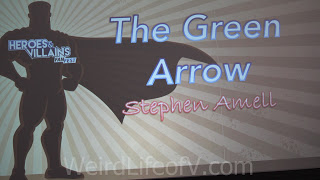 The Green Arrow panel at Heroes and Villains Fan Fest was Stephen Amell’s solo panel, during which we learned he was responsible for getting Heroes & Villains Fan Fest created.  I’m so glad he did, because this was a very fun and relaxed convention where everyone, fans, guests, staff, and volunteers were having fun (or at least they genuinely looked like they were having fun) thus creating a great atmosphere.

One of the best things Stephen did is when an audience member tried to mimic Oliver’s voice to say the famous line “…you have failed this city, ” but pronounced Stephen’s first and last name incorrectly.  Stephen responded with “you have failed to say my name right” or something to that effect.  (I really need to write up recaps sooner.)  The pronunciation was something like Stefan Ahmil. It wasn’t the first time his or Robbie’s name was mis-pronounced by fans, but no one at the microphones screwed it up for the rest of the convention.

Someone asked Stephen how he met his wife so he decided to tell us the “real” story, then stopped to ask if his wife was around (as he looked around), then told the story: he was watching Mad Men, saw her, looked her up, found out she was going to be at a party which he was also attending, where he found her and told her he loved her on Mad Men, then went about his business for the rest of the party.  At then end of the night, she tapped him on his shoulder and handed him a piece of paper with her phone number on it.  Stephen then said, “and then she was pregnant” to which everyone laughed, but he added (more quietly) “No, no.  There was lots of stuff in between.”

Stephen was presented with a cake made in the shape of the Green Arrow.  I wish I was able to get a better photo of it, but they had it turned away from me.  John Barrowman posted a video during the convention weekend to his Facebook page of what happened to the cake.  You won’t get spoilers from me, because you should check out that and all of the videos John Barrowman posted that weekend.

Check back for more panel recaps from Heroes and Villains Fan Fest in San Jose, and be sure to get tickets to the next conventions in New York/New Jersey and Chicago.