I wasn’t planning on attending Long Beach Comic Expo until they announced Alan Tudyk as one of the guests, and that he would be having a Con-Man panel on the Saturday of the convention.  I was seconds from purchasing a Saturday badge when I realized that I should look for a discount code.  Goldstar.com had weekend passes for less than the regular price of a Sunday pass.  A friend sent me a “karma code” and I only ended up paying $16.50 for a weekend pass.  Goldstar ticket: $20 + $6.50 – $10 karma code = $16.50.  Yes!!!

I had gotten a cold the week before the convention, but I managed to make it through Saturday, though I left earlier than I had originally planned.  I decided not to attend on Sunday since I was (and still am) recovering.

The first panel I attended was “Chase Masterson’s Pop Culture Hero Coalition & The Girl Scouts.”  The Girl Scouts had participated in a workshop making comic pages with a comic book professional, and they were given their badge at the beginning of the panel.  The focus of the panel was anti-bullying, and the panelists were Chase Masterson (who also moderated), Jayashri Wyatt (UN advocacy specialist), Dr. Janina Scarlet (clinical psychologist), and Tommy Walker (actor, Daredevil).  The panelists told personal stories of being bullied, and how they handled being bullied (and what they should have done). Jayashri had met with Malala Yousafzai on three occasions during her work with the United Nations.

The next panel, was the ConMan panel, but I’ll recap that in another post.

The last panel I attended was “The Marvel Report Presents Marvelous Cosplay.”  It was their first panel, and the panelists discussed how they began cosplaying, Marvel cosplay, and answered audience questions.  At the beginning of the panel, they handed out raffle tickets to the audience members and there were two Funko pops they were going to raffle off at the end of the panel.

They offered advice on how to begin cosplaying, and the misconception that you need to know how to sew in order to cosplay or that it has to be expensive. 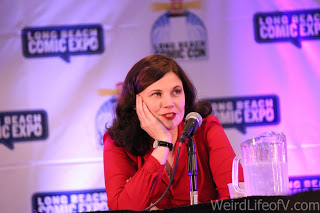 I think the most important pieces of advice were:
1. Cosplay what you love
2. Go to thrift stores or military surplus stores.
3. Think outside the box—look at pieces and see the potential it has
4. Don\’t stress about accuracy because
5. Cosplay is always a work in progress

I\’ll post a recap of the ConMan panel soon, and I\’ll be attending Silicon Valley Comic Con and WonderCon in March.  I hope to see you there!