I love checking out all of the fun and amazing installations outside of the convention center during San Diego Comic-Con.  There seems to be more happening outside the convention each year, and this year was not an exception.

First, I made sure to check out the OutsideComicCon website a few days before the festivities begin as events and interactives are added all the way up to convention.  Not all of the activities operate every day of the convention, and I want to be sure of days and hours of operation.  Note: many of the evening events and parties require tickets (paid and non-paid) or RSVPs in advance.

NBC was in their normal spot near the Tin Fish restaurant.  Their installation for their new show, Timeless, included a ride (Gravitron) which was fun.

The Real Tampabay Ghostbusters hosted Mass-Hysteria  on Friday at the Werewolf  bar in the Gaslamp.  The event began as a party, but it became an all day (all ages during the day) before the day.

My \”Slimer\” pancakes were keylime syrup (more like a cinnamon roll style frosting) with whipped cream and shredded coconut.  There was some lime zest for garnish. It was absolutely delicious, and I didn\’t need any of the maple syrup they gave me.  My niece had their jelly donut pancakes (always available), but couldn\’t finish them because she said it was too sweet.  It has glazed donut icing with raspberry filling between the two pancakes.

This year, Entertainment Weekly had an interactive area called ConX which I will cover in a separate post. Be sure to check out my post on Camp Conival at Petco Park hosted by Geek & Sundry and Nerdist. I\’m also posting the Amazon Streaming installations separately.

South Park celebrated it\’s 20th anniversary with a large photo op area and a photo booth with your choice of South Park character.  I chose to have a picture with Mr. Hanky. 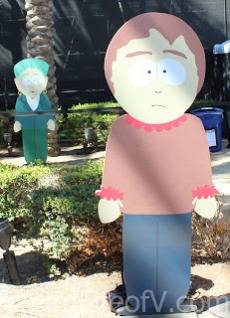 FX took over the grassy area behind the Hall H lineup again this year.  I regret not doing the air bag jump, but I was wearing a skirt two of the days! 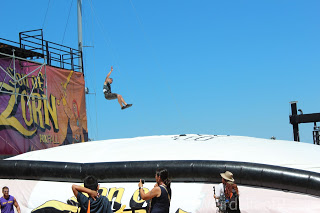 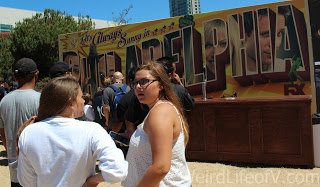 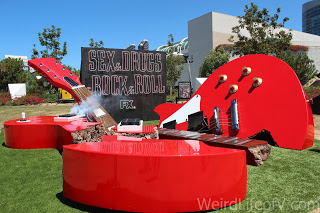 M.A.C. Cosmetics had a Star Trek themed installation for their new Star Trek inspired line of cosmetics.  The installation was across the street from the Children\’s Museum which was housing Nerd HQ again this year.

The \”Next Day Line\” (NDL) for Saturday\’s Hall H panels was two long lines of tents.  The next two photos are only a teeny, tiny portion of the line taken around 11:30am Friday morning.  Temperatures were in the high nineties (record-breaking temperatures) the entire weekend, and Friday was the hottest day of the convention. 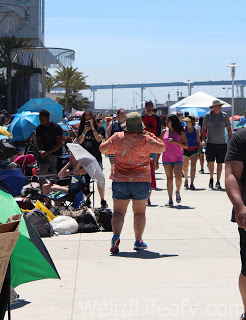 Saturday morning had passes for the Aliens screening being handed out to passersby, and I grabbed one even though I already had passes to the screening via Gofobo.com.  I still love that movie!!  They didn\’t even check to see if we had passes when they started handing out the wristbands to the line.


This is all of the free swag I received during this year\’s San Diego Comic-Con outside the convention center.  There are IMDb items which I received aboard the yacht IMDb leased for the weekend.  I won a contest to come aboard and there was free swag galore.  Everything else was free and open to everyone (i.e. no convention badge needed), and there were also printed photos I have which are not included here. 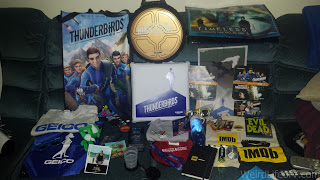 I didn\’t have time to get over to the Adult Swim interactive area this year.  There is just so much to do and not enough time.