This was the inaugural year for the ConX experience presented by Entertainment Weekly during this year\’s San Diego Comic Con. There were two stages from which there were panels, screenings and a concert.  It was a bit far from the rest of the convention activities, but it wasn\’t a detraction for me.  My niece and I went to the ConX area Thursday morning, but we got there before they opened, then they opened later than posted.  There were food trucks with plenty of tables shaded by umbrellas to sit and eat.  There were plenty of portable toilets as well.

I didn\’t get to try the Sweetart candy making since it wasn\’t operating while I was there.  One of the first things I wanted to do is to get my free t-shirt.  You can choose the design as well as the color of  the shirt you want. There were free donuts from Krispy Kreme, where they also had Power Rangers lanyards, nylon frisbees, lip balm, etc.

There were a few photo ops such as Kubo and the Two Strings mural, Captain America: Civil War, and American Horror Story Hotel.

There were shave stations provided by Schick, and those who participated received a bunch of free swag.  Everyone received a free water bottle, and they had a water truck supplying drinking water to fill stations.

There were also several charging station which were conveniently placed on picnic style tables so you could sit and relax while charging your devices.  These charging stations were solar powered so points for being GREEN!  The only problem I had is that I didn\’t have the adapter plug with me so I couldn\’t use them.  I feel it would have been better if they had at least a few outlets with usb ports.

There were Lego man sculptures on a few of the park benches in the area which were promoting  The Art of the Brick exhibit at the Ruben H. Fleet Science Museum. 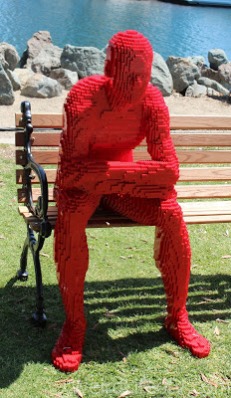 I really hope Entertainment Weekly brings ConX back to San Diego Comic Con next year.  I want to spend more time there when things are happening.