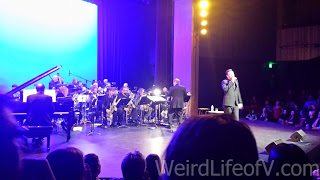 Apologies for the extended absence!  I’ve been working on getting a new blog set up for fandom and pop culture content and using this site for my non-pop culture life.  Alas, life got in the way and I haven’t been doing much with either website until now.

I also apologize, in advance, for the poor quality of the photos in this post.  No one else was taking pictures (I can’t believe it, either!), so I was trying to be discreet while also dealing with a darkened theater.
Today it has been three years since I had the opportunity to attend a live performance by Seth MacFarlane.   This benefit event in Santa Monica was occurring simultaneously with another jazz concert in Hollywood at the Dolby Theatre.  Seth was scheduled for both events, and I couldn’t figure out how he was going to be in two places at once.  Cloning?  Body double?

It seems the Ron Jones band performed for the first half of the Santa Monica concert while Seth was at the Thelonious Monk Institute Jazz Competition & All Star Gala Concert at the Dolby Theatre in Hollywood.  Seth began his portion of the concert after intermission.

The Moss Theatre in Santa Monica is an intimate venue so there are no bad seats, and this gives the audience a sense of connecting with the performers, even the French horns in the back.  French horns for a jazz band?  Yep.  I guess that’s why it’s call “Jazz Influence Orchestra” rather than “Jazz Band” or “Jazz Orchestra.”   While my photos make it seem I’m very far away from the stage, in reality, I was only about 5 feet from the edge of the stage. 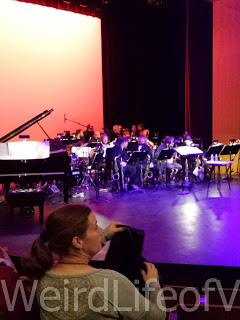 If you enjoy Jazz (I’m not a fan per se, but I do enjoy it) I do recommend attending the events presented by Jazz Bakery at the Moss Theater located at the Herb Alpert Educational Village in Santa Monica, California.
Toodles,
Veronica