We headed to Las Vegas the last week of March to take a break from Los Angeles, and explore the surrounding area.  With COVID restrictions beginning to loosen many places were in the process of re-opening, though many storefronts and eateries remained closed, but I’ll talk more about that later.  Our plan was to head out to the Lake Mead area for a hike one day, then drive the Extraterrestrial Highway another day, and relax the last day before we left for home.

We stayed at The Venetian Resort in a Luxury King Suite for three nights during the week.  The room has a separate and spacious living room area with a desk and small dining table.  There are three televisions in the suite, one across from the bed, one in the living room, and a small television in the bathroom (which we didn’t even turn on), and I would advise you to be careful how you point the remote for the bedroom tv as you may turn the living room tv on/off.  I did this a few times.  It was a bit fun to see both televisions turn on with a single press of the power button, though.  Also, upon seeing the bathroom television I thought I would take a nice bubble bath and watch tv until I realized that I would have to have my head next to the tap in order to see the television screen.  Doh!

The shades are open and closed with a set of control buttons near the bedroom television, and there are another set of controls next to the left side of the bed.  The bedside lights and lights over the headboard are also located on the left side of the bed.  As I sleep on the right side of the bed, I had to have my boyfriend turn on/off the lights.  The overhead lights are very bright so be aware in case you are lying on your back when they turn on.  I learned that the hard way.  I also would have liked easily accessible power outlets and/or USB outlets at the bedsides.  There were plugs behind the nightstands, but I wasn’t interested in moving furniture so I charged my phone at the outlet and USB ports location on the desk. 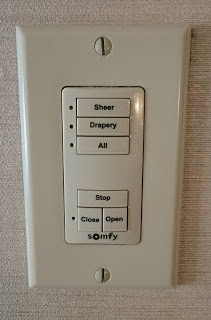 We didn’t care much about our view when we checked in so we didn’t have a view of the strip, but we had plenty of light come through the window.  The Venetian provided a PPE packet containing two disposable surgical masks, a small bottle of hand sanitizer, and two individually packaged sanitizing wipes inside a reusable vinyl pouch.  Additional masks were left by housekeeping each day even though we didn’t use the disposable masks as we had brought our own.  Also, the toiletries they provide smell so nice, I really enjoyed them.

Arriving in Las Vegas Tuesday afternoon, we relaxed a bit then had some dinner at one of our favorites, Giordano’s, at their Las Vegas Strip location.  We didn’t make a reservation, but they were able to accommodate us quite quickly for a seat in the outer patio section.  It was a bit cold and windy, but the food was very hot and filling.  We opted for pasta dishes rather than our usual deep dish pizza as I didn’t want to wait an hour for the pizza.  We chatted with our server a bit about what closures they endured (three months initially), and we learned that they had to hire a lot of new staff and cooks since their previous staff moved on during the closure which is completely understandable.  She was just hoping that this tiered opening will give their almost completely new cooking staff time to get comfortable so they are prepared for usually very busy restaurant by the time they are able to have 100 percent capacity.  I hope they are for everyone’s sake. 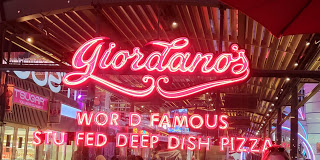 After our hike on Wednesday, we had dinner at Cañonita inside the Venetian’s Grand Canal Shoppes area where we had to wait for approximately 30 minutes out of an estimated hour long wait time for a table as we didn’t make a reservation.  They took a phone number to text us when our table was ready so we walked around the Grand Canal Shoppes where I took this photo next to a Jelly Belly (I love Jelly Bellys!)  I ordered the Cañonita Burrito with chicken which was so delicious I didn’t want to stop eating even though I was really full.  We walked around the shops again to walk off some dinner to make room for some gelato.  We got gelato from a stand called Cocolini which is also located inside the Venetian’s Grand Canal Shoppes.  I got the Cotton Candy and Birthday Cake flavors.  I was really disappointed in the Cotton Candy flavor (Brusters’ Cotton Candy Explosion flavor ice cream in 50 times better), but the Birthday Cake flavor was a bit better.

I spent the rest of the night relaxing in the hotel room watching whatever movies were available.  My feet and shins were still sore from our hike that morning so it was a nice way to spend the night.

We had planned on driving the Extraterrestrial Highway on Thursday, but I opted to have a relaxing day instead of driving 500 miles roundtrip.  We decided to leave Las Vegas early Friday and drive the Extraterrestrial Highway then head straight home in Los Angeles.  We had a late breakfast as Hash House a Go Go inside the Linq Hotel & Casino which wasn’t taking reservations and had a two hour wait for a party of two.  We waited almost two hours for our table and had breakfast at one my favorite breakfast spots in Las Vegas.  I spent most of the day in the hotel room watching movies and relaxing until dinner which was at the Royal Britannia Gastropub.  I had looked at their menu via the Venetian’s website, but ended up being very disappointed as they only had a very limited menu available for whatever reason.  The menu we were given had less than half of the items on the online menu, and some of the items on the menu they gave us weren’t available.  I was really looking forward to one of their alcohol milkshakes, but no milkshakes were available that night. Booo!  Since neither of the two entrees I wanted to try were on the menu, either, I went with the avocado pasta and added the grilled chicken.  The chicken was extremely dry and the pasta had no flavor at all.  Then we found that they don’t charge the room (and Cañonita had issues finding us the previous night), so we couldn’t use our $50 dining credit we had available to us.  I love the décor and ambiance of the Royal Brittania especially with the power outlets at the booths and under the bar, but the food leaves a lot to be desired.  We walked over to Black Tap to see if I could get a milkshake, but they couldn’t seat us so we went to back to our room and ordered room service.

Room service didn’t have any Tiramisu available so we ordered the Limoncello cheesecake and a breakfast item which we figured (and were right) was a better dessert item called the Panwich.  The Panwich is a stack of vanilla pancakes with chiboust cream in between them and topped with fruit.  They were both delicious, but the Limoncello cheesecake was probably my favorite.

Overall, this was a very relaxing Vegas trip with mostly delicious meals, I’m still thinking about that amazing burrito from Cañonita and the Limoncello Cheesecake, and exploration.  Be sure to check out my recaps of our Lake Mead hike and our drive across the Extraterrestrial Highway.